RESPOND in a nutshell

HOW WE UNDERSTAND MIGRATION GOVERNANCE …

RESPOND will study migration governance through a narrative which is constructed along five thematic fields: (1) Border management and security, (2) Refugee protection regimes, (3) Reception policies, (4) Integration policies, and (5) Conflicting Europeanization. Each thematic field is reflecting a juncture in the migration journey of refugees and designed to provide a holistic view of policies, their impacts and responses given by affected actors within.

Migration governance is about controlling borders and security, but it is also about defining who will be accepted “in” and who will be left “out.” The responses of the actors involved and their interactions matter for the outcomes of the policies. We observe that in the face of the recent refugee crisis, policy-making is stretched and polarized between developing “more efficient measures” (particularistic) to tackling the mass movement of people across borders and preserving the foundational “normative principles” (universal) of the global governance of migration.

Refugees cross land and oceans, they venture into new territories, and they traverse old borders, demonstrating the impossibility of excluding the power of those (refugees) who aim to get “in” and cross the borders despite all security measures. Unfortunately, many die in this journey. Refugee protection is therefore an inseparable part of migration governance and opens up a debate about how to balance state security with human security. Those who manage to enter into new territories become the subject of reception policies, which have a longterm impact on the integration or alienation of refugees. The governance of migration is also about finding durable solutions for the settlement of refugees. This brings us to the topic of integration of refugees (now “newcomers”) in the post-migration context. Migration governance is not only about what makes people move (pre-migration context), but also about what people do after they cross borders and settle into a new country. How does settlement affect their lives, the lives of people already living there, and policies, institutions and economies? And, what new social, cultural and political realities are constructed? Integration policies, practices and outcomes are directly linked to the governance of migration. Without examining integration, a full understanding of migration governance will always be lacking.
Following the same logic, it is also critical to study the future of Europeanization within the context of migration governance. Conflicting views on European integration have become increasingly evident in the face of the refugee crisis.

Mass migration is not a recent phenomenon, but it has recently reached new frontiers and is challenging the operation of established migration regimes. The course of change in its direction and patterns will transform the position of communities, the responses of actors involved, and the definitions that make a country source, transit or destination. We argue that collective forms of migration management now operate beyond states or multigovernmental agencies but engage meso and micro level actors. Therefore, we pay close attention to outlining and analysing responses to the recent mass migration at meso and micro levels as well as macro levels and provide a distinct way of understanding migration governance as a web of responses given by the various actors involved, including refugees themselves. We believe that this approach overcomes the pitfalls of a linear understanding of policy making and implementation processes, and explains the co-constitutive relations/interactions between macro, meso and micro levels. Within this framework, we will provide indepth insights about the interactions between actors at different levels: policy makers and implementers, policy receivers, and “sending and receiving” networks.

The expanding literature on migration governance has so far mostly concentrated on policy-making processes. In doing so, significant differences between localities (sub-national/local context) in the management of migration, institutional developments and policy responses are overlooked. What is generally missing from the literature are detailed insights into the local implications of migration governance policies; the emerging role of non-governmental actors in filling in the policy vacuums, and the co-constitutive relations between policies and responses at macro, meso and micro levels. It is these aspects that will be particularly examined by the project

Challenging the traditional understanding of refugees as passive actors who only submit to policies, our research defines a new subject position for refugees, as people who have been forced to find creative solutions to life threatening situations and as people who can generate new forms of knowledge and information. Rather than mere passers-by or victims of circumstances, refugees can also be regarded as creating and using networks, constructing spaces for their own possibilities, cultivating solutions, and articulating relationships between disparate cultures by translating between them. Most importantly, they become carriers of cultural knowledge in and through their personal experiences, which are often missing from accounts that focus on their numbers and patterns of movement. This knowledge takes form prior to, during, and after their odysseys to new countries. The project will therefore also have a micro level focus on the perceptions of refugees about border, asylum, reception and integration policies. We believe that such a micro level focus will deepen our general understanding about push and pull factors. 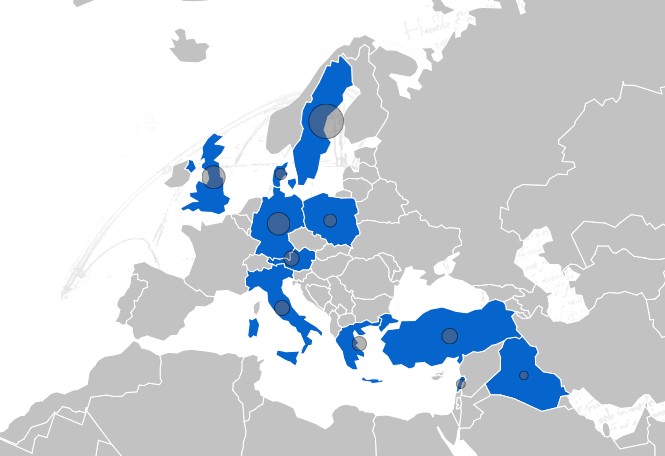 Although the main focus of this project will be on the Eastern Mediterranean Route, in order to deepen our comparative understanding the project will also look at the Western and Central Mediterranean Routes through macro level analysis of the Sub-Saharan Region countries, in particular Morocco and Libya, as well as the North-Eastern borders of the EU through Ukrainian migration to Poland. All of these routes and relevant third countries are important for the governance of migration and EU external policy.

At the level of inquiry, the project follows a multi-level analysis focusing on three levels: macro (supranational, national), meso (subnational, local, NGOs) and micro (individual). We aim to illustrate the co-constitutive processes between macro, meso and micro levels by implementing an integrated research design in which we will study the refugee ‘crisis’ and its impacts at all levels.

Methodologically, our research relies on a multi-stage research design, incorporating a variety of quantitative and qualitative methods for data gathering and analysis. At analytical level, our transdisciplinary research design will be built on the findings of legal and policy analysis, comparative historical analysis, political claims analysis, socio-economic and cultural analysis, longitudinal survey analysis, interview based analysis, and photovoice techniques.

The work plan is organized around 11 work packages (WPs) – of which 8 have research tasks. The project also includes two WPs to organize impact-related activities targeting different audiences, including the scientific community, policy actors and the public in general.