The work plan is organized around 11 work packages (WPs) – of which 8 have research tasks. The project also includes two WPs to organize impact-related activities targeting different audiences, including the scientific community, policy actors and the public in general. 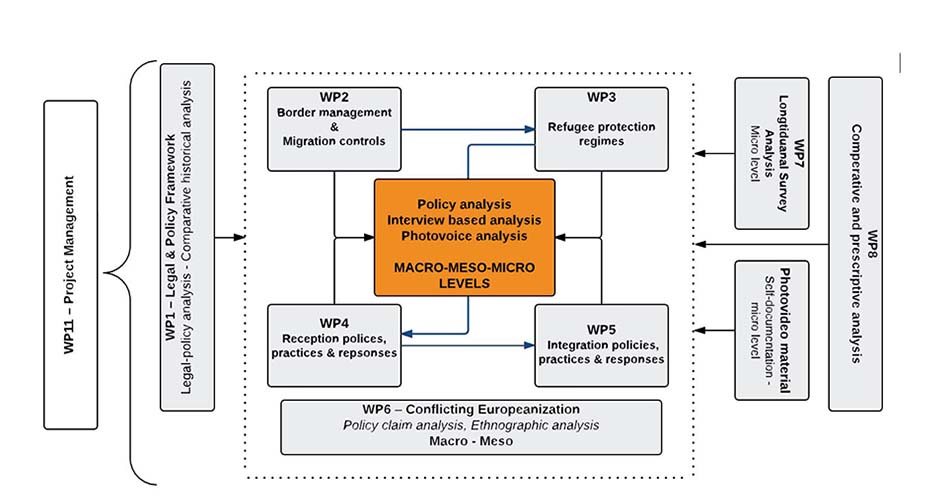 This work package aims to gather background information about the socio-economic, political, legal and institutional context of migration governance in the countries that are the object of our research (Greece, Italy, Germany, Sweden, Austria, Poland, UK, Turkey, Iraq and Lebanon). The WP has a threefold objective:

Finally, WP1 will serve as a basis for the socio-economic and cultural, legal, policy and institutional background which contextualizes the outputs of subsequent WPs.
Deliverables

This work package focuses on the EU border management and migration control regime. Its overall aim is to explore the impact of policies on MSs and migrants and their effectiveness within the wider context of EU Asylum and Migration policies explored in other WPs. It also examines border management policies at macro, meso and micro levels from the perspective of the diverse actors implementing them and those being affected by their implementation. It has the following objectives:

This WP aims to examine the impact of recent migration movements on asylum determination systems and refugee protection regimes in the EU, selected MSs and third countries. Drawing on the policy frameworks produced in WP1 and WP2 the objectives in this WP are:

By focusing on both policymaking and implementation in Turkey, Greece, Italy, Austria, Germany, Sweden, Poland, UK, Iraq and Lebanon, this WP will contribute to understanding policy coherence within and among MSs, as well as between the EU and third countries. In addition, it will ascertain coherence in relation to adhering to protection norms and procedural standards as established by international, and national legal frameworks.
Deliverables

This WP focuses on reception policies, practices and humanitarian responses to the current refugee crisis. Despite efforts to achieve harmonization (especially promoted by the 2016 CEAS and by the ENP), relevant differences exist in this field in the countries that are the object of research (Austria, Germany, Greece, Hungary, Italy, Poland, Sweden, UK, Turkey and Lebanon). These variations contribute to secondary movements and asylum shopping, create tensions and nationalistic policies and implement inefficient and discriminatory reception policies. WP4 will fulfil five ancillary, but very relevant, objectives:

The main aim of this WP is to examine how the recent migration crisis may affect the future of European integration. We propose to establish the main parameters of divergence in migration governance and to explore how these could impinge on the future course that EU integration takes with regards to the relative importance it is due to pay to secular, humanitarian, internationalist, rights- and liberties-oriented goals in comparison to religious, security-focused, exclusionary positions that are also rejectionist of multiculturalism, foreignness, and alternative lifestyles and orientations within the community. The main objectives of this WP are as follows:

This WP will be conducted in Greece, Austria, Italy, Hungary, Germany, Sweden, Poland, and the UK.
Deliverables

The aim of this WP is to disentangle the contextual factors driving recent migration movements from the perspective of forced migrants on micro levels, both in terms of pushing and pulling factors. A quantitative survey will be conducted to support the micro-level dimensions of the study (specifically WPs 2–5). Thus, through the survey we will gather information about refugee/migrants’ norms, values, attitudes, strategies and behaviours in terms of borders, refugee protection, reception, socio-economic, and socio-cultural integration (dependent variables). While collecting this data, we will take into account refugees/migrants’ individual characteristics, such as gender, age, educational level, region, socioeconomic level, and religious affiliation (independent variables). The second main goal of the survey is to examine responses via the collection of longitudinal data (repeated measurements of individuals over time), in order to assess how their norms and values change as they adjust to new societies. We have a large enough sample to disentangle differences based on various characteristics, but we will also use follow-up samples for migrants. The survey will be conducted in Sweden (destination) and Turkey (transit) among Syrian refugees.
Deliverables

The project focuses on 11 different countries with 14 partners and on four thematic areas with three level of analysis. This constitutes a complex matrix in terms of analysis and requires a concentrated attempt at integration. WP8 aims to revisit the research findings obtained in the other WPs (1-7) and to elaborate on trends, patterns and drivers in the research of mass migration, its governance and changes over time. WP8 will identify the range of domestic, regional, international factors, actors, interests and interactions involved in mass migration. It seeks to use the research results presented in the integrated reports of each of these WPs in order to:

Moreover, WP8 will help to promote the theoretical development and theory refinement of mass migration response policies. Thus, it will contribute to theories of refugee and forced migration studies, ideally with conceptualization of the notion of governance of mass migration and reflection on causal links. Looking at this comprehensive picture we will be able to evaluate whether or not the notion of a single global regime for forced migrants remains analytically coherent or politically relevant.
Deliverables

The main aim of this WP is to ensure effective communication of the research findings to different audiences, which are defined as

In order to disseminate the results effectively, in an early phase we will establish migration governance networks in each country, consisting of local/national stakeholders and relevant non-state actors, and will organize roundtable discussions. These networks will function both as a learning platform for participants (incl. the research team) and as a dissemination channel to reach out to the main target group.
Moreover, RESPOND will

At the scientific level, we will;